A Rite Of Passage…. McCabe’s 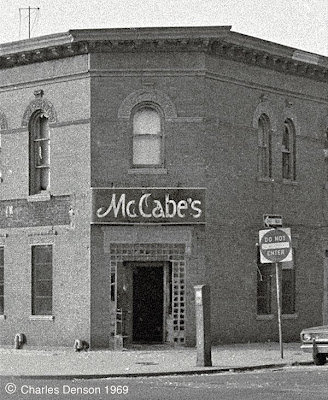 “You can’t be a real country unless you have a beer and an airline… it helps if you have some kind of a football team, or some nuclear weapons, but at the very least you need a beer.”   Frank Zappa
I thought it was appropriate to use a quote to start this post and Frank Zappa had a way of saying things that make sense to me.  I thought a lot about this post since with this blog and fast approaching 60 (ouch) I find myself reflecting on the many different  things I have done.  Now…. I’m not a big drinker.  A glass of wine in the evening for my heart and beers on occasion with the guys before an ASU game.  Sometimes a little Limoncello (which I make myself, thank you very much) after a good meal but that’s it.  I’m always the designated driver.  There is, however, the rite of passage of going to a bar for the first time.  Back in the 60s, if you recall, the legal drinking age was 18 although I think bars did not have to serve you unless you were 21.  I went to McCabe’s the first time when I was about 16.  I think I went with Randy Sobelman and I was both excited and very nervous.  Contrary to todays’ bars, McCabe’s was a bar where men drank.  I don’t ever recall seeing a woman there, let alone a teenage girl.  Anyway, Randy had been there before and he told me to act like I knew what I was doing.  He said to just put the money on the bar after I ordered and just leave it there.  We walked in and I’ll never forget the sights and smells.  A small jukebox, lot’s of cigarette smoke and the bar along the north wall.  The bartender’s name was Whitey and I remember word for word what transpired:
Whitey:  What’ll you have?
Me:  I’ll have a 77.
Whitey: (Sarcastically) You mean a 7 & 7?
Me: (With false bravado) That’s what I said.
Whitey smiled and turned to hopefully get my drink.  I didn’t even know what was in a 7 & 7.  I just knew it was something that I heard was a drink.  I was scared shitless.  I sat on an empty stool and there was some money and an empty glass on the bar.  I didn’t know what that meant but I soon did.  Before my drink came, I felt a hand on my neck and I was lifted off the stool and dropped to the ground.  The man never said a word to me after he sat down.  No one said anything.  I don’t even know if anyone was watching or laughing or whatever.  We moved further down the bar and Whitey brought us our drinks.  I don’t remember how much it cost but I do remember feeling like a grownup.  I went in many times after that and thought I was cool because we called it Whitey’s, not McCabe’s.  Maybe Whitey was the owner, I have no idea and I’m hoping that comments to this post will answer more questions about this neighborhood landmark.  That was the last time I ordered a mixed drink.  I always ordered Rheingold after that first time and it was served in what looked like little Welch’s Grape Jelly glasses and they cost 20 cents.  One time I was there with someone and Vernon Petty bet us that he could drink the glasses of beer faster than us.  He was older and of course, he drank his slower so we would get drunk.  He bought the beer so it wasn’t a total loss.  All in all, just another coming of age Coney Island kid experience.  Anyone else?  Please comment below.
Joey DePinto
3/21/2010

Thanks to Charlie Denson for the great photo.