Having been a fan of the author Joseph Heller since I read CATCH 22, I knew he grew up in Coney Island. However, I wasn’t aware until I began reading his autobiography, NOW & THEN – FROM CONEY ISLAND TO HERE, that he lived on W.31st St. between Surf & Mermaid. Just down the block from the Coney Island Projects.

Joseph Heller grew up there in the 30’s. I lived at 3030 Surf Ave., Bldg 2, during the 50’s & 60’s. But in spite of the time difference, I remember very clearly so much of what he writes about in the first 3 chapters of his book. He writes a lot about the amusement area and the beach of course but he also writes in detail about Seagate and PS 188 and about little known Railroad Ave. Railroad Ave. was a “non-street” by the time I moved to Coney Island in 1957. The railroad/trolley tracks were barely visible beneath the high weeds. I got a chill down my spine when on Page 40 he describes in detail, Mr. Moses Candy Store on the West Side of 31st St. Moses’ Candy Store was still there when I lived there. I remember it well, as I’m sure many of you from the Projects and the side streets do. I remember grumpy old Mr. Moses with his trousers hitched way up high, coming out to serve us from between the curtains that separated his home from the candy store. I also remember that as I got older, grumpy old Mr. Moses was really wasn’t so bad if he was shown a little kindness.

I highly recommend at least the first 3 chapters to anyone out there from “the old neighborhood.” Especially if you lived between Seagate and W. 29th Street when “The brass ring on the carousel seemed as good as gold.”
Terry Goldstein
2/24/2009
Posted by Coney Island Houses at 10:19 PM No comments: 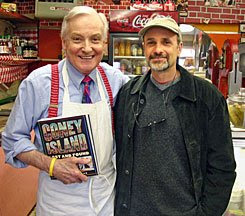 CIHP:
Jimmy Prince began working at Major Market as a young man in 1949 and became the shop's proprietor in the 1970's. The storefront is emblazoned with signs that say "Coney Island is Coming back Folks, Let's Watch it!" and "It's Major's for your Barbeque Specials." Founded in the 1930's, Coney Island's oldest butcher shop is a throwback to the days when the entire length of Mermaid Avenue, from Stillwell Avenue to Sea Gate, was a bustling retail strip serving a predominantly Jewish and Italian population. The shop was one of the few survivors the area's downturn in the 1960's and 70's, and, later, the incursion of supermarkets.

* * * * * * *
One of the audios in the History Project's online oral history archive is an interview with Jimmy. A second recording captures the sounds of a typical day at Major Markets.

Prince will also star in an upcoming documentary by Charles Denson, executive director of the Coney Island History Project. The documentary with premier this summer.
Posted by Coney Island Houses at 8:29 AM No comments: 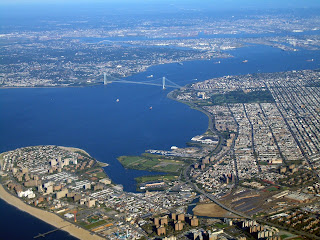 Pretty cool aerial shot of Coney Island and the bridge on Google Earth. If you click on the picture, it will open to a larger size for a more detailed view.
Posted by Coney Island Houses at 3:41 PM 5 comments: 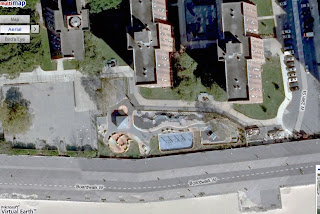 There looks to be an upgrade of the Big Park underway, although I have no idea when it started. The entire east end of the park up to the park house looks new. Notice the entrance into the park is set at an angle, as opposed to previously when it was a straight shot in. If you click on the picture, it will open to a larger size for a more detailed view.
Posted by Coney Island Houses at 3:32 PM 1 comment: