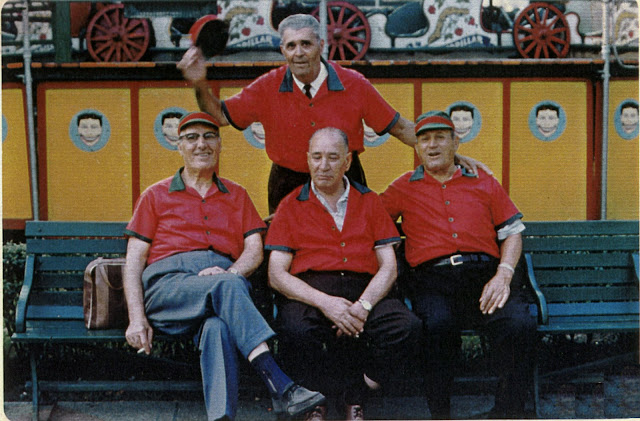 We were young when Steeplechase closed in 1964. Imagine the fun and memories if it had closed in 1969? My grandfather Matteo Barbaro worked on the Caterpillar ride. Remember when the cover closed and at the end of the ride it opened and people were making out? When my cousins would come and visit, they would want to go to Steeplechase. We would go by the old post office on Surf Ave and 17th St, which was the entrance to Steeplechase and we would try to get our grandfather's attention. He always ended up looking over and he would motion for us to wait until the ride stopped. He would come over and say something to the guy at the gate and they would let us in when no one was looking. He would then give us a handful of tickets with a few punches left on them. All the rides had a number of punches to get on and when he took tickets that had the correct number left, he would pocket them to give to us. Like this one: 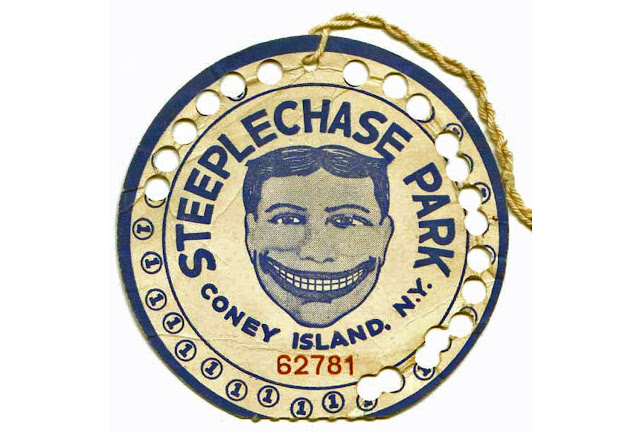 In addition, he would tell us which rides were operated by his friends and we were instructed to say that we were Matty Barbaro's grandchildren. These were all elderly Italian men so they would make a fuss over us and let us on without a ticket. My grandfather told us to ask every ride operator if they knew him. If they didn't, we used a ticket. We usually had tickets left over but I never paid to get into Steeplechase or go on any rides. A while back, I got a tattoo as an homage to my grandfather and to Steeplechase. I used the ticket above as the stencil and I changed the ticket number to his birthday, March 29, 1894. Here it is: 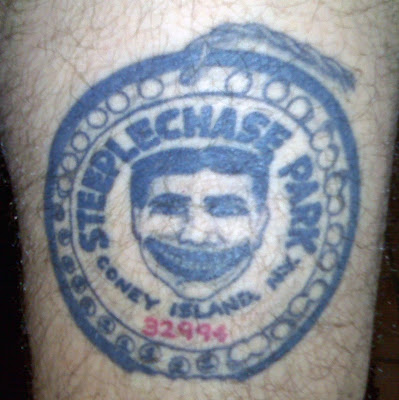 I loved Steeplechase. I still remember the smell. Last thing....when you exited the Caterpillar, there was a sign asking if you dared see the rare red bat! You climbed the ladder to look in the cage and there it was....a painted red baseball bat!
Joey DePinto
08/25/2008
Posted by Coney Island Houses at 2:41 PM

Ahhhhhhh yes, Steeplechase. I was too young to ride the electric horses, but my sister did. I got in trouble for sinking the sailboats in the kiddie part of the park by standing up in the boat when my mom said not to.

I remember there was an entertainment stage, there was a clown with a buzzer/shocker stick and as the people would come off the ride (maybe the horses) he would shock them and the women with dresses he would prod over to a grate in the ground that had a fan and blow up their dresses.

I remember the huge wooden slide too, that was lots of fun!
Cindy

Cindy... you are right, the clown would zap you when you got off the horses. It was a great ride.

I remember a bunch of us went to Steeplechase as a Group Date when I was 13. Whatever happened to Bernard Mandell???

Merrill he lives out by you somewhere at least thats what his brother Marty told me.
Anyone remember the carousel? Catching the rings?? Or the Wonder Wheel in the sliding car...So many great rides and attractions back then ( who am I? My mother? Back then) Ok well yep I about the age she was when we left coney island. Everyone remember Coopeys? Goood Lord how many of the guys worked there??? And lets not forget the cresco club...keep those memories coming its good to go back every once in awhile...although lately my mind has been drifting back more often then not....

Thank you Merrill. It actually won first place in a contest at a sports bar before an Arizona State football game. Go Sun Devils!
Joey

WELL GUYS I ACTUALLY HAVE ONE OF THESE STEEPLECHASE TICKETS ALONG WITH SEVERAL OTHER MEMORABILIA FROM CONEY ISLAND. I MADE TWO CONEY ISLAND WALLS IN MY BREAKFAST NOOK. THERE I HAVE PICTURES, SOME MY OWN, TAKEN IN 1974 ASHTRAYS, SPOONS, SCOOTER RIDE TICKETS A PEN AND INK DRAWING OF CONEY ISLAND.DONE BY ONE OF OUR FRIENDS WHO WAS A COP AT THE 60TH PCT. TIME AND DISTANCE HAS TAKEN THE GIRL OUT OF BROOKLYN, BUT NEVER, NEVER WILL BROOKLYN BE TAKEN OUT OF THIS GIRL.

i think your story is awesome, myself born in Massachusetts do remember my uncle drove the MTA bus, so I was young may be eight or nine and he would let me on for free and sometimes he would joke and say young man where is your money. The tattoo is great what a way to pay tribute impressed.

Thank you for the kind words John. It was a special time for sure.