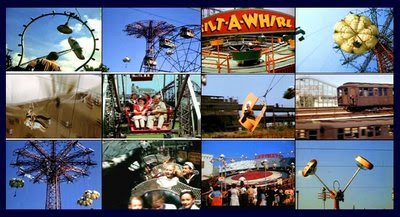 A New York based filmmaker is working with the Coney Island History Project on a documentary about the now defunct Astroland Amusement Park and they are in need of those old Coney Island home movies from the 1960's, 70's and 80's, especially film shot on 8mm and 16mm film. They're also looking for any outstanding pictures taken during the same period.

The Coney Island History Project says:
The History Project will shoulder the expenses of film transfers and return the original film along with a DVD transfer to anyone who donates their material. Donors will also receive credit in the film and two complimentary copies of the completed documentary. Contact the History Project at info@coneyislandhistory.org or 718-265-2100.

Filmmaker, JL Aronson, who cordially invited me to see his work in 2007, is a consummate New York filmmaker having crafted documentaries about pigeon fancying in Williamsburg and the underground karaoke scene on Manhattan’s Lower East Side. He has also directed a series on the 1970s, ’80s and ’90s downtown New York music scene for Manhattan Neighborhood Network (in association with the New School) and created marketing videos for Central Park Summerstage, Celebrate Brooklyn, PEN World Voices Festival of International Literature, the Siren Music Festival, River to River Festival and other New York institutions. In 2006, his “documentary musical” Danielson: a Family Movie won numerous film festival awards throughout the country before going to theaters in December of that year and DVD in April 2007.
Film clips at creativearson.com
Posted by Coney Island Houses at 1:44 PM

Who knows where to download XRumer 5.0 Palladium?
Help, please. All recommend this program to effectively advertise on the Internet, this is the best program!